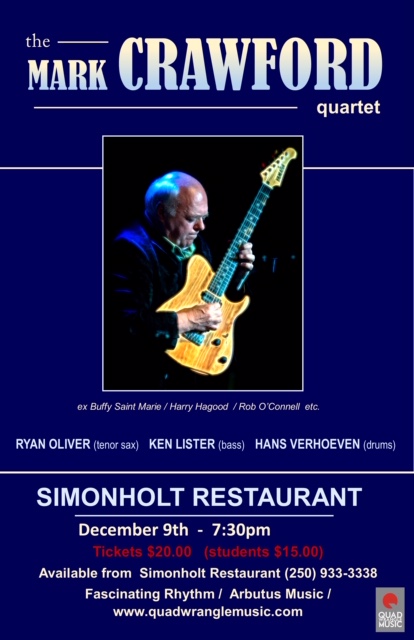 Guitarist Mark Crawford is a veteran of the Toronto jazz and studio music industry, consistently receiving high accolades as a performer, educator and composer.  Over the years, he has developed a sophisticated and reflective approach to music, gleaning inspiration from a diverse array of sources and appearing at countless venues throughout the city and beyond.  He has been featured on numerous recordings, including the late, great Hagood Hardy’s “Between Friends” and “Morocco”.  Mark toured extensively with Hagood’s groups. He has been both a sideman and a leader for the “Sound of Toronto Jazz” concert series for CJRT Radio, and his compositions have been performed everywhere from small jazz venues to live concert settings with choir and orchestra.  He considers himself very lucky to have shared the stage with some of the best musicians Canada has to offer, including Barry Elmes, Pat Labarbera, Alex Dean, Buffy Saint-Marie and even Sharon, Lois and Bram! Mark’s performances draw from his extensive repertoire of the great American songbook, jazz standards, ballads and Bossa Novas.